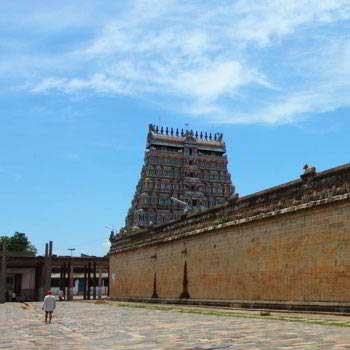 Is there anybody called God? If so, where is He and in what form? How can we get His blessings if such a supreme power does exist? The answers for all these intriguing questions in every human's life can be obtained in a place called Chidhambaram in the southern part of Tamil Nadu. The word “Koil” refers to Lord Natarajar Temple in Chidhambaram worshipped by the Saivaites across the country. The architectural elegance and the splendid beauty of this temple is to be visited by everyone who visits India. This is the place where the culture, art, sculpture and performing arts have been nurtured since 2000 years symbolizing the rich tradition and heritage of Tamil Nadu.

This is the 1st of the 275 shrines mentioned in the 6th century Saivaite canon Thevaram - a collection of hymns rendered by the different Saiva Saints. This temple is said to have existed from the ancient, pre-medieval and medieval period, constructed and enhanced by the different kings of Pallava, Pandya, Chola and Vijayanagara dynasties. The façade of the temple welcomes us with the grand gateway tower and we are surprised to know that this is one of the very few temples having entrances on all the four sides.

Chidhambaram is one of the five “Panchbootha Sthalams” representing the five forms of classical elements. This temple is for the sky, while the other four are, water – Tiruvanaikoil, Sand – Kanchipuram, Air – Kalahasthi and Fire – Thiruvannamalai. . It has been found out that, Chidhambaram is exactly at the geographic line serially with the other four Panchabootha sthalams and the reason for this architectural and geographical wonder is still unknown.

Unlike all the other Shiva shrines, the presiding deity is in the form of Dancing Nataraja – instead of the lingam form. The dance performed by the Lord is called the Cosmic Dance and the prolonged research on Bing – Bang Theory and the Sub atomic and Anti matter theories have at last consented that the cosmic dance of Lord Siva is an analogy to the movement of atomic particles on the universe. As a sign of this, the Lord Nataraja’s idol is placed in the front of CERN building in Switzerland.

Spread over an area of 40 acres, the Natarajar temple portrays the architectural elegance of Pandya and Chola Styles. The temple has enjoyed extensions and enhancements and the kings have instituted various endowments for all the functions to be celebrated grandly. The gold and diamond ornaments given by the Royal families still adorn the deities in the temple.

Apart from a separate shrine for the consort of Lord Nataraja, Sivakami Devi , there are other two forms of Lord Shiva. One is in the form of crystal Lingam  and another is the place called “Chidhambara Rahasiyam”. God is eternally available everywhere. To make the world realize this fact, there is a ritual performed in this temple every day.  There is a hall with dark screen representing the ignorance of the mankind. Once the curtain is raised, you can see golden strands with 108 golden vilva leaves hanging in an open space. The golden strands represent the fact that God is omnipresent.

Besides these significant shrines, there are other sub shrines as in the case of other Shiva temples. Daily rituals are conducted by a group of people who have been doing it for generations called Dhikshidhars. The tower above the sanctum is a gold plated with 21,600 gold tiles representing the number of breathes we take on a day and all the tiles are joined by 72,000 gold nails representing the nerves in our body. The temple is said to be in the heart of the sphere and the cosmic dance of Lord Nataraja is responsible for the functioning of all atoms in the Universe.

Visiting this temple guarantees you the divine experience which will transform your life in a wonderful manner.

The temple is open from 6 AM to 10PM on Fridays and Sundays.

By Air:The nearest airport is Trichy from where you can reach the temple in 4 hours drive.

By train:Plenty of trains connected to all parts of south India stop at Chidhambaram

By Road:Chidhabaram is well connected by road to all parts of the state.