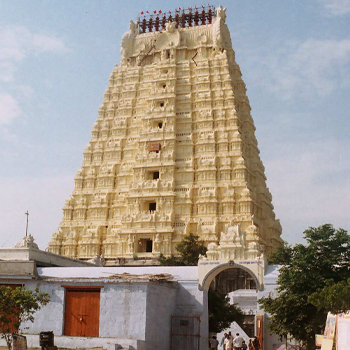 The presiding deity here is Ekambareshwarar or Lord Shiva, worshipped as the Prithivi Lingam. A Somaskandar panel featuring Lord Shiva, Goddess Parvati and Lord Skanda adorns the rear of the main shrine, which has been held in worship for centuries together. It is believed that Goddess Parvati worshipped Lord Shiva here in the form of a Prithivi Lingam, the Lingam improvised out of sand, under a mango tree. Legend has it that the neighbouring Vegavati river overflowed and threatened to engulf the Shiva Lingam and that Parvati or Kamakshi, embraced the Lingam, and Lord Shiva, touched by the gesture materialized in person and married her. In this context he is referred to as 'Tazhuvakkuzhainthaar'.

As mentioned before, there is no separate shrine for Ambal or the Goddess in the Temples in Kanchipuram as she is worshipped along with Lord Shiva, as in every other Shiva temple in the precincts of Kanchipuram temples.

The Saint poet Sundaramoorthy Nayanar is said to have recovered his eyesight (left eye) after offering his worship here.