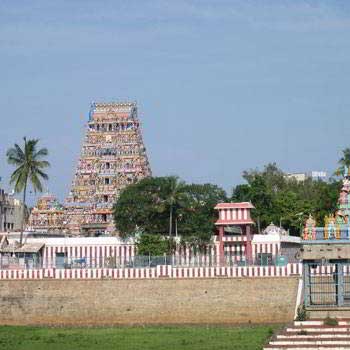 Dwelling just away from the sea-shore, where Lord Shiva with his consort Parvathi Devi, fondly called as Kapaleeswarar and Karpagambal bestow their blessings on the devotees those who surrender themselves to God is the sacred place called Kapaleeswarar temple. This temple is situated in Chennai, the capital city of Tamil Nadu. The age old part of the city called Mylapore in the southern belt of Chennai has become a holy place because of this particular temple. It is the versatility of the town that you have the ultra-modern life style and at the same time, an overwhelming devotion and commitment that can be seen among the residents of Chennai. Mylapore Kapaleeswarar Temple is a “never to be missed” place in the itinerary of South India Pilgrimage Packages.

The town Mylapore bears its name from the name of the bird Peacock. In Tamil, Peacock is termed as “Mayil”. It is believed that the town was once a forest where there was a large number of peacocks. Hence the name of the town. There is another legend that, Goddess Parvathi was once cursed to be born as a pea-hen on the earth. Upon her hard penance in this region, she pleased Lord Shiva and got back her original personality.

The temple has so many legends to its credits. Once, Lord Shiva, who was not given due respect on His arrival, plucked one of the five heads of Lord Brahma. So, to please him, Lord Brahma came to Mylapore and installed a Linga which is the form of Lord Shiva to be worshipped. Mylapore is revered to be as equal as Mount Kailash, which is the abode of Lord Shiva. The sanctity of the place can be understood by the history that, the Four Vedhas have worshipped here, Lord Rama, before proceeding to Sri Lanka to save his wife Sita, came here and worshipped Lord Shiva. The mentor of the demons Sukracharya, worshipped Lord Shiva here and regained his lost vision. The list goes on to explain the reverence of both Goddess Karpagambal and Lord Kapaleeswarar.

The inscriptions and other evidences state that the temple was built in the 7th Century CE by the Kings of the Pallava Dynasty. But it is believed that the temple is at least more than two thousand years old. The Greek Geographer Ptolemy had mentioned about this place as “Millarpha: the place of abundant culture and business” in his works during AD 90 – 168. Also, Mylapore is the birth place of the world renowned Thiruvalluvar, whose work called Thirukkural, which was written 2000 years ago, insists on the morals to be followed by mankind. The historians’s records explain that earlier the temple was on the sea shore where the Santhome Church is present now. But it was demolished by the Portuguese in AD 1566. With few of the remains, the present temple was built three hundred years ago by the Kings of Viayayanagara Dynasty. The deities and the temple are mentioned in the 7th Century Saivaite Canon “Thevaaram”. The holy saints Gnanasambandhar and Arunagirinadhar have sung the benevolence and mercy of the Goddess in their literary works which are immortal.

Just by looking at the Main gateway at the façade of the temple, the magnificence of the temple can be understood. There are two entrances for the temple, the one in the East is 40 meters high, and the other in the West is shorter facing the sacred tank. You can see broad residential areas on the four banks of the temple tank called “Chithira Kulam”. Apart from the presiding deities Lord Kapaleeshwarar and Goddess Karpagambal, there are other sub shrines for Lord Ganesha, Lord Muruga and the usual arrangements as you find in other Shiva temples.

The vehicles for the deities present in the temple are Bull, Adhikara nandhi, Elephant and Peacock. It is to be mentioned there is a golden chariot in addition to the above said vehicles. The deities are taken on a procession on these vehicles along the four banks of the sacred temple tank during festival days or on days of high religious importance. There are many halls for conducting divine discourses and cultural programmes. This place is also called as “Sukra Puri” and “Vedha Puri” because it was of extreme reverence for both the celestial gods and demon kings.. It is believed that people get out of their problems when they come here and worship the Goddess. So, hundreds of devotees visit the temple every day. The Bronze figurines of the 63 Saivaite saints called Nayanmars are housed in a separate place. They are all the devotees of Lord Shiva who attained salvation by their uncompromised devotion and commitments to the Lord.

The religious poojas are offered to the deities six times a day starting from the early morning till late night. The four steps in the poojas are anointing, decorating with ornaments and flowers, offering food and waving the lamps as a method of worshipping. These rituals are followed daily without any deviation. Apart from the daily practices, Goddess Karpagambal is decorated with an ornament called “Kaasumalai”( a garland made of 108 gold coins) on all Fridays during evening time. A lot of women devotees assemble to worship her at that time. Besides these, weekly, fortnightly and monthly poojas are followed strictly as in other Shiva temples. During every special Pooja, we can see thousands of devotees arrive to seek her blessings.

The festivals celebrated in this temple are Navrathri, Aadi Pooram, Vasanthothsavam and Brahmothsavam. Out of these, the festival “Brahmothsavam” deserves a special mention here. It is a ten days long festival which is celebrated in a pomp manner by the residents of Mylapore. The entire area is decorated and people become ready for a great gala ahead. On every night during these ten days, the deities are taken on processions on different types of vehicles called Vaahanas. The most important of these practices is the Arupathimoovar Festival on the eighth day of Brahmothsavam. All the 63 Saiva Saints are taken on a procession around the four banks of the temple tank and lakhs of people come to Mylapore to attend this function. Lot of people make arrangements to offer food packets, water bottles, sarees, and whatever they can afford to the pilgrims. The philosophy behind this function is to reinstate the fact that even a common man can attain the divinity if he leads a pious life committed to serve others. The other events are, drawing chariots and the Divine marriage for Lord Kapaleeswarar and Goddess Karpagambal. With this happy event, the Brahmothsavam comes to a close.

Visiting this temple and spending few hours in the holy premises will definitely make a difference in your experience and Goddess Karpagambal will call you again because She is a symbol of “Wish Yielding Power”.

How To Reach Mylapore? :

By Air:The nearest airport is Chennai from where the cabs can take you to the temple which is only at 18kms distance. The place can be reached in one hour drive during regular traffic.

By Train:The two huge railway stations Chennai Egmore and Chennai Central disgorge people from all parts of the country and well connected to even the smallest towns. From the railway station, the temple is at a distance of 7 kilometers which can be crossed easily by road.

By Road:Chennai being the capital of the state, it is connected across the network of all places in the state as well as to the neighbouring southern states. From the Asia’s largest Bus Terminal Koyambedu, the temple can be reached in one hour even during heavy traffic flow, covering a distance of 17 kilometers.