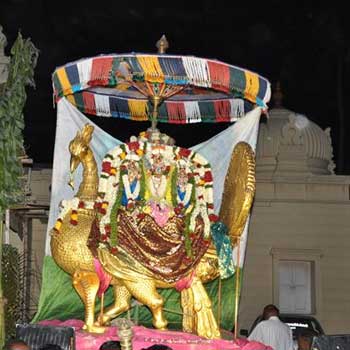 The sacred place for Hindus, nestled around the verdant Sivagiri Hills in Madurai Region, where Lord Muruga abodes in the form of an ascetic boy relinquishing all his finery, having only one small stick called Dhandam, is Lord Dhandayuthapani in a standing posture at Palani. This is the third shrine and the most predominant among the six abodes of Lord Muruga called “Aarupadai Veedu”. Palani is otherwise fondly called as “Thiruaavinankudi”.This is the richest temple in Tamil Nadu in terms of the revenue generation with the offerings of the devotees. This is one of the few temples in Tamil Nadu where you can see vehicles bringing thousands of devotees to Palani throughout the year.

Once, Saint Naradha brought a fruit called Gnanapazham (Fruit of wisdom) to Mount Kailash. When Lord Shiva wanted to give the fruit to both his sons Lord Vinayaga and Lord Muruga, the saint counselled him that only those who goes around the world in a short span of time will get the fruit. Immediately, Lord Muruga, mounted his peacock to go round the universe. But, Lord Ganesha, circumambulated his parents stating that, for a child, only the parents are his world and hence he won the fruit. When Lord Murugan returned back, he came to know that all his efforts were in vein. So he decided to leave his family and settled on Palani hills where the temple is situated now. He mistook that he was betrayed and decided to be a monk and try for self-realization.

The idol of Lord Muruga here is made up of an amalgam of nine minerals called “Navapashanam” which are poisonous in nature. The idol is believed to be created and consecrated by Bogar, one of the eighteen Siddhas in Tamil tradition. To offer poojas to this idol is as equal as offering poojas to all 9 planets together in one place. The deity, after many centuries of worship, got neglected and submerged in a forest. Only during the 6th century, King Perumal of the Chera Dynasty, discovered the idol during his hunting, built the present temple and reinstituted the worship. The King is commemorated with a small stela at the start of the staircase going up the hill.

The temple is situated on the hill Sivagiri and it can be reached by climbing the neatly laid stairs where after every 50 stairs, there is a roof topped resting place. There is one more rock-cut pathway called the Yanai Pathai, mainly used by the ceremonial elephants but it is open for pilgrims also. For the convenience of the pilgrims, the Government has laid two funicular railway tracks which starts operating from 6 a.m. There is also a rope car facility, introduced in the last decade.

The construction of the temple was completed by the 9th century by the Kings of Chera Dynasty. The Sanctum Sanctorum reflects the Chera Style. The brilliant works of the outer courtyards, in the form of two fishes, the royal insignia of the Pandyas dynasty undoubtedly portrays their contribution to this temple. Besides the presiding deity, there are other sub-shrines for Lord Shiva with his consort Parvathi and for Bogar.

The word Muruga means beauty in Tamil. As it implies, the language and cultural identity for the Tamils often rest on Lord Muruga. He is uniquely worshipped as the family deity in most of the Tamil Families. He is fondly called by other names also as Subramanian, Kandhan, Velan, Karthikeyan, Dandapani and Kumaran. It is quite common to see children with these names in Tamil Families.

The most important religious practice in this temple is anointing the presiding deity. It is an act of ritual purification in which materials like oil, honey, and sandalwood paste are used for anointing the idol and thereafter washing with water. This ritual takes place four times a day and this practice has led to many controversies that the idol is getting spoiled. Despite that, the regular practices are followed.

Tonsuring is another important religious practice observed in this temple. You can see number of children and adults waiting in queues for tonsuring as an act of fulfilling their owes to the Lord. Raakkala Chandhanam, is a noteworthy practice. The head of the deity is anointed with sandalwood paste and is left overnight. It is a much sought after Prasadham (offerings) by the devotees as the sandalwood paste is believed to be acquiring medicinal properties throughout night.

Devotees in ochre clothes carry ornamental mounts called “Kaavadi”, beautifully decorated with flowers. It is a common practice to see that they come by walk on bare foot from very long distances carrying the Kaavadi as an act of gratitude to the Lord.

An interesting practice in the hill temple of Palani is that before the close of the temple every night, the Lord is informed about the status of the temple accounts. This custom is practiced by the custodians of the temple who are doing it for generations.

Yet another religious practice here is the distribution of Panchamirtham, which is believed to be prepared by Lord Vinayaga for the first time and distributed to his parents. From then onwards, it has become a custom in this temple to prepare this divine mix with ingredients as Dates, Honey, Banana, Jaggery and Raisins. Even today you can see a great demand for this in the temple premises.

The temple is kept open from 6 a,m to 8 p.m on all days and on festival days from 4 a.m onwards.Lord Muruga enjoys six regular rituals in a day. Besides the regular services, there are other special festivals celebrated in this temple which attracts lakhs of devotees across the world. They are,

Apart from this, you can see in almost all the evenings, a Golden Chariot drawn by the devotees to repay their owes to the Lord. There is also a Golden Peacock and a Golden Cradle for the same purpose. Booking to make this offering is available online through the official website maintained by the temple authorities.

Arunagirinathar is a famous rioter turned bard and a staunch devotee of Lord Dhandayuthapani Swamy. He has glorified the God by singing His benevolence and mercy and the collection of songs is called Thiruppugazh.

It will be surprising to know the ancient God of Tamil Culture, Lord Muruga, is diasporic that for the above said festivals, there are celebrations in a pomp manner in Malaysia and Singapore. The governments of these countries of late declare holidays on account of these festivals.

How to Reach Palani?

By Road : Palani is situated in Dindigul district and well connected by Road to all the cities around. It is equidistant from Madurai and Coimbatore,i.e.,111 kms. Palani is at the 57th km from the district headquarters Dindigul. From Chennai, it is seven hours drive on the Chennai-Theni Highway covering 485kms.The distance between Trichy and Palani is 154km on NH83.

By Train : The nearest railway station is Dindigul. Also,27 trains cross Palani heading from and to Chennai on any day and Palani is found to be a busy railway station well connected to the major cities of South India.

By Airport : The nearest airports are Trichy, Coimbatore and Madurai and from there the temple can be reached by Road.