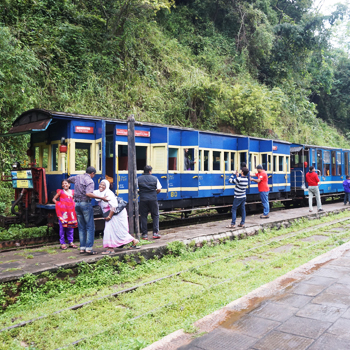 South India's only Rack Railway, The Nilgiri Mountain Railways run trains between Mettupalayam and Ooty, popularly called as Toy Trains. The train takes roughly 4.5 hrs to climb the hill and it reaches the foothill in four and half hours

The return journey from Ooty through the steepest track is really a wonderful experience. The Toy train crosses through Coonoor, which is an important intermediate station besides halting at three stations as water stop. Crossing Lovedale, the train reaches Ooty carrying the happy tourists who have enjoyed an ecstatic travel.

The toy train is maintained by The Ministry of Railways. During peak season time, four trains are run both ways. The Toy train is recognized by UNESCO as the World Heritage Site and though there is a fully computerized ticketing system deployed by the Ministry of Railways, the tickets for this toy train are issued as manual tickets to preserve and pass on the vintage feel to its travellers. Travel in Toy Train to cherish the nature in its own way.