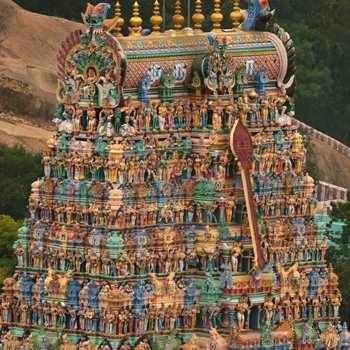 Get bewitched by the majestic appearance of the Lord of war, the patron of Tamil Nadu and the most handsome of all Gods, the great Lord Subramanian (Murugan) gracing from his shrine in Thiruparankundram. The legend has it that this is the place where Lord Muruga tied the knot to his spouse Deivanai. This is a 2000 years old hillock temple beaming with the pride of being the pioneer of the other five army camps. A one hour journey from Madurai will take you to this archaic temple.

There are 11 famous ponds around the temple, out of which, Saravanapoigai and Lakshmi Theertham are very famous

The Saga behind this Temple

In those days, Rishi's were in distress because of the wayward behaviour of the demons and so they appealed to Lord Shiva. Lord Siva underwent a deep penance and produced six sparks from his forehead, ergo Lord Muruga was created. Then Muruga fought with the demon, defeated him and converted him as his vehicle peacock. This is the place where Muruga was rewarded by all the devas and he got married to Deivanai, the daughter of Lord Indra

Thiruparankundram is located in the outpost of Madurai.

Bus : Buses from Madurai Periyar bus stand and Thirumangalam bus stands will aid you to reach the temple. From the bus stand, the temple is at a walkable distance.

Train : Madurai railway station is the nearest station to this temple. From the station there are surplus buses to Thiruparankundram.

Prayers : Devotees specially pray for their weddings and for child boon