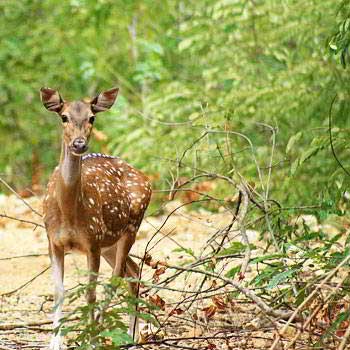 The first zoo opened for public in India and the Largest Zoological Garden in India, spreading across a vast area of 1300 acres, is the Arignar Anna Zoological Park called as Vandalur Zoo. It was actually housed inside the Government funded Museum in the year 1855 in Pantheon Road, Egmore, Chennai. Later on, due to the increase in the number of inmates and due to the fact there was a lot of noise pollution due to increase in the density of city traffic, the zoo was transferred to the outskirts of the Chennai in a serene area called Vandalur. The zoo was constructed at a cost of approximately $75 million and it was opened to public on 24th July,1985 by the then Chief Minister of Tamil Nadu Dr.M.G.Ramachandran. This zoo is affiliated to the Central Zoo Authority of India. After few years, the zoo enjoyed many expansions including a rescue and rehabilitation area in an area of 230 acres. The very objective of constructing this zoo in such an exhaustive manner is to prevent the extinction of very rare species of wild animals at the national and international level.

Even one full day will not be sufficient for the visitors to this zoo as there are 2553 species of flora and fauna maintained in this premises. There are 1500 wild species and 46 endangered species which are prevented from entering into the extinct list. Other than there are species of 47 mammals, 63 birds, 5 amphibians, 25 fishes and 10 insects. It is to be noted with pride that this zoological garden is the second wildlife sanctuary in India next to the Mudumalai Wildlife Sanctuary.

Once you enter into the zoo, you will be taken to a different world where the animals and birds are living in a natural forest environment both in the free zones as well as in the moated enclosures. The resting places for them have been arranged in such a way that the biological eco system is well maintained. This is accomplished by the theory of “Survival of the Fittest”.

The zoo has been organized with well built roads for the visitors to leisurely witness the lifestyle of the inmates. There are two aviaries for the birds as Sanctuary aviary and Walkthrough aviary. Migration of the birds from other countries is facilitated by planting the suitable trees and bushes in the nearby lakes Hassan and Otteri on the two extreme exits of the zoo. Apart from this , there are several places that will kindle your interest to know the lifestyle of the different creatures in this world. Butterfly House, Reptile House called Serpentarium, Amphibian House, Crocodile enclosures, Primate house, Place for nocturnal animals, Small Mammals house, Aquarium, Prey-predator enclosures, Pre-historic Animals park, Zoo School and a Zoo Library(Kept open on Mondays and Fridays) are some of the places must be visited.

Apart from the above, visitors can enjoy the fifteen minutes safari in the densely vegetated areas where the wild animals can be seen. As this zoo belongs to the Vandalur Reserve Forest Area, the premises is professionally maintained with natural vegetation as in the forests of Western Ghats which will make the life of the animals more comfortable. Elephant safari has also been introduced in the recent years in order to attract more number of visitors.

The zoo is very particular in conserving the natural resources. Excellent management systems have been implemented and maintained for water and power. Solar panels have been installed for the enclosures of the animals for light and ventilation. Despite the very high temperature in Chennai, the climate inside the zoo premises is very pleasing because of the densely grown plants on the entire area.

The vandalur zoo named after the renowned Tamil Politician and the former Chief Minister of Tamil Nadu,  Arignar Anna Durai,  is situated in the Chennai – Trichy National Highways, otherwise called as Grand Southern Trunk Road. The entrance of the zoo is at the intersection of the Thambaram – Kelambakkam Road. It is at a distance of 15kms from the Chennai International Airport and 6 Kms from the busy junction the Chennai City, Tambaram. The zoo is located adjacent to the Tambaram Air Force Station and comes under the surveillance of Vandalur Reserve Forest Area.

Come to Vandalur and forget your busy world outside at least for one day in your life !