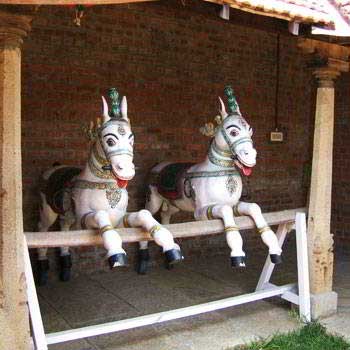 As the name implies, Dakshinachitra Museum portrays the culture and lifestyle of the southern states of India, especially the villages which are at the verge of extinction. Obviously, the globalization has the direct and huge impact on the livelihood of the Indian Villages. Due to large scale migrations from Rural to Urban for employment and other reasons, the villages are gradually getting evacuated. Dhakshinachitra  Museum is an excellent initiative to preserve the culture, heritage and tradition of the people who have lived for generations in the villages and left their foot prints there. The museum is situated in Muttukadu, along the East Coast Road, which is at a walkable distance from the MGM Dizzee World in the outskirts of Chennai.

The museum mainly focuses on the lifestyle and culture of the four southern states of India namely, Tamil Nadu, Kerala, Karnataka and Andhra Pradesh. The houses which were about to be sold and those to be demolished were bought and taken down to the museum campus and the renovation works were done by the artisans in an exhaustive manner. Then the houses emerged as exactly as they were in their hometowns. The vernacular lifestyle followed by them, the household articles used by them and the essential articles which played a vital or trivial role in their lives have been collected or made anew and kept in the respective houses. There are eighteen such heritage houses in this museum which will really be a feast to our eyes. We can know the age old tradition and heritage of the people of all the four states under single roof. It will be a wonderful experience to witness the basic principle of India “Unity in Diversity”. People with different caste, creed, color and lifestyles, food habits live in the same country and proudly identify themselves as Indians.

If you take the houses in Tamil Nadu, Brahmin House, Tradiitonal Merchant House, Silk Weavers’ House, Farmers’ house and Potters’ house have been reconstructed in this museum. They look like exactly the original houses in the respective parts of the villages.  The Cyrian Christian house, Calicut house, Traditional Trivandrum Hindu house and the Granary have been the choices for Kerala. The houses taken from the Karnataka state are the samples from Chikmagalur and the house of the famous Ilkal weavers. The house representing those of coastal Andhra Pradesh and Ikat house form the portion of Andhra Pradesh. the houses have been reconstructed with so much care that not even a minute detail is missed.

Apart from  the heritage houses, you have lot more places to visit in the Dakshinachitra Museum. There are weekly workshops conducted the visitors during the weekends. You can try with your hands the simple arts and crafts on your tour around the museum. Traditional games like board games, spin tops are available for engaging your kids and they can also learn a new style of playing games. Theme based exhibitions are conducted and the visitors can have a deep insight of the rich tradition of the southern states.

There are very good facilities in the museum apart from the above. Conservations labs, Library, Open Air Theatre, Ceramic center, crafts shop and craft bazaar are some of the interesting places to visit. To facilitate the visitors, spacious guest houses at reasonable rates and a restaurant are functioning in the premises. Week end workshops for school children and teachers are also conducted on various themes.

Come and visit Dhakshinachitra where you can know the tradition, culture and lifestyle of south indian villages which have been the pioneers in civilization in many aspects.The heritage homes, artefacts, the items exhibited in the crafts bazaar and the workshops are the places where the South Indian Villages are still alive !

Except on Tuesdays, on all other days from 10 am to 6pm.

The museum is situated at a distance of 32 kms from the Chennai Airport. You can reach the destination in less than an hour.

The museum is equidistant from Chennai Egmore and the Airport.

You can reach the museum in one and half hours by road from the Asia’s largest bus terminus, Koyambedu.