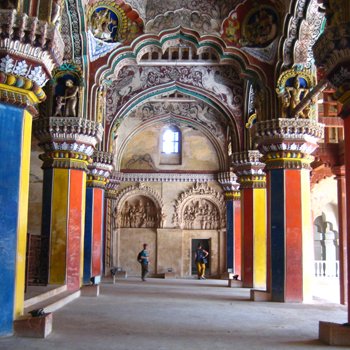 Tanjore palace holds a great admiration among all the visitors. This palace was built by the Nayak kings in the year 1550 AD and partly by the kings of Marathas. The threshold of this palace is a grand one with many beautiful sculptures. The fortitude that encloses the palace is very huge with two grand gateways.

The beauty of the palace is the eight storied building located on the southern side of the palace. This tall tower is called as Goodagopuram which is 190 feet high. This tower acted as the watch tower during the war time and to spy the enemy’s invasion for the Tanjavur kings.

There are two durbar halls are present inside the palace and these halls were used as the court room by the Nayakas and Marathas. There is a great library named as Saraswathi Mahal which stocks millions of rare editions of books in all Indian languages. There are about 30,433 Sanskrit palm manuscripts and 6,426 volumes of journals.

There is yet another tower like structure built by the Nayakas with six stories. This tower helped the Nayakas to see through and worship Lord Ranganathar, during the rule of British. There is a music hall which is a replica of Madurai Thirumala Nayak Mahal.

Tanjore is one of the major cities in India and hence buses are available from all major towns.