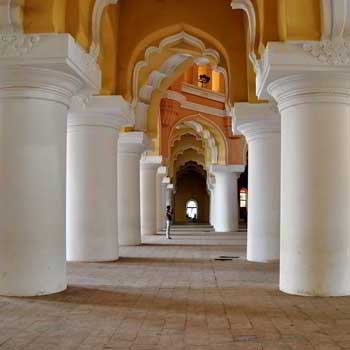 The 17th century citadel, depicting the aesthetic sense of the Nayak Dynasty is the Thirumalai Nayakkar Mahal in Madurai, the sleepless city in the down south of Tamil Nadu. The king Thirumalai Nayakkar of the Nayak Dynasty built this everlasting engineering wonder which has got a proud place among the tourist spots of Tamil Nadu. Originally it was the residence and Durbar Hall of the Royal Family. When Nayaks were ruling Madurai, the Dutch, Portughese and European Traders were visiting Madurai. The King is believed to have employed the Italian Architects for the construction of this masterpiece. It is built deploying a blend of Indian and Italian Architectural styles. This palace is situated 2 kms north east of the famous Meenakshi Amman Temple in Madurai. The original buildings were four times bigger than the present day architecture and many parts of the buildings have got ruined due to the invasions and natural disasters. Today we are able to visit only the Grand Entrance, the Main Hall and the Dance Hall as the reminiscent of the palace.

The King, while constructing this palace, wanted it to be the grandest of South India and an icon too. Besides the Italian styles, the Islamic styles of architecture can also be seen in various parts of this palace. The interior of this palace is comparatively unbeatable with any of the contemporary buildings in India and the exterior is more gorgeous in its style and architecture. Thirumalai Nayakkar mahal is known for its huge pillars where each pillar is 82 feet high with a width of 19 feet.

The palace is bifurcated into two vast areas called Swarga Vilasam and Ranga Vilasam. The residence of the Royal family, Shrines, Shopping complexes, armoury and palanquin place were once housed inside these two portions. Among all, the central Courtyard and the Dance Hall are the major centre of attractions for the visitors. Whoever visits the Mahal, upon entering the palace stands spell bound looking at the fascinating Central Courtyard which is unimaginably huge measuring about 42,000 sq ft. The central dome in this courtyard is supported by the stone ribs and the massive pillars which is really an architectural masterpiece of the Nayak Dynasty.

Post-Independence of India, this palace is declared as the National Monument and is maintained by the Tamil Nadu Archaeological Department. The pillars and the huge halls of the palace attract many people from cinema industry and almost on all days, you can see some cinema shooting is going on in the Courtyard. Besides these things, light and sound shows are conducted depicting the story of the epic Silppathikaram. It is about the story of the lady legend Kannagi who burnt Madurai City for the injustice done to her husband.

It is worth paying a visit to this fascinating age old monument, Tirumalai Nayakkar Mahal that portrays the culture, tradition and rich heritage of Tamil Nadu.

The Mahal is kept open to visitors on all days from 9 AM to 5 PM with a lunch break of half an hour between 1 PM and 1.30 PM.

By Air : The nearest airport is Madurai from where you can reach the palace in less than half an hour covering a distance of 11 kms. There are flights operated daily between Madurai and Mumbai, Bangalore and Colombo.

By Train : Madurai is a city well connected by train with all major cities of the country. From the railway station, the palace is at a distance of just 4 kms.

By Road : The palace is very near to the world renowned tourist attraction Meenakshi Amman Temple. It is situated on the eastern side of the city at a distance of just 2 kms from the temple. Madurai is connected with all the other cities by Road