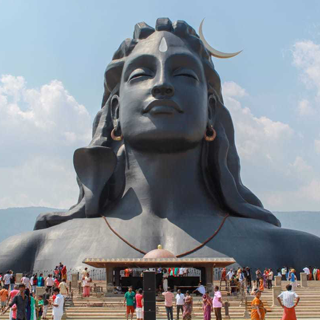 In the city of textiles - COIMBATORE, the Manchester of South, the busy city which holds huge industries and IT hub, amidst this hustle and bustle, in the lush dense forest of Velliangri hills, there is a special place that offers peace for your soul and body, started by Sadhguru Jagi Vasudev in 1992 in the name “Isha Yoga centre” which has occupied nearly 150 acres near Velliangri hills. They follow four different paths of yoga that is Kriya (energy), Gnana (Knowledge), Karma (action) and Bhakthi (Devotion) to reach the eternal peace of your soul. The important attractions in this place are Theethakunds – Artificial pool with lingam, Spanda hall – A serene tranquillity meditation hall, Linga Bhairavi temple, Dhayanaliga – Yogic temple, Isha home school and rejuvenation centre completely for transformation of an individual. You can see lot of people had volunteered themselves to serve the people visiting Isha center. They have fixed schedules for prayer and aarti.

A gargantuan statue for Lord Shiva is erected here called “Adi Yogi:, just opposite to Isha Centre. The name “Adi” means “in the beginning”. Shiva is considered as the first guru of Yoga to human community. This 112 feet iconic statue was made by using 20000 iron plates and 500 tons of iron. It is then awarded as the world’s largest bust statue by the Guinness Book of World Records. This place would be stupendous during Maha Shivarathri every year. You can see a Shiva civilization here chanting mantras and doing poojas for the entire night of Shivarathri.

Rules Regulations to be followed in Isha:

How to Reach Isha Yoga Center :

By Air : Coimbatore International airport is the nearest airport which is just 45 kms away from Isha Center.

By Train : Coimbatore Railway station is the nearest railway station which is the major rail-head mainly connected to all important cities

By Road : Coimbatore has well laid and maintained roads that is connected to all the major cities in the plains.