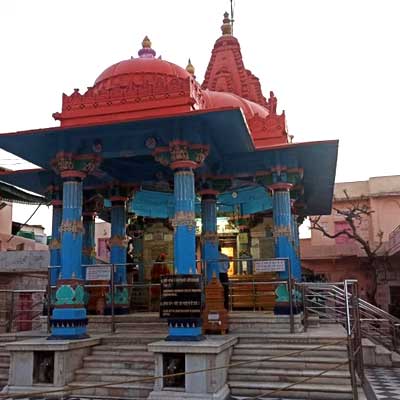 One of the very few temples in India, dedicated to Lord Brahma, the creator of this Universe, as per Hindu Mythology, and the most prominent of all is Brahma Mandir at Pushkar in Land of Royals, Rajasthan.

Located on the banks of the popular Pushkar Lake, the Brahma Mandir is one of the most popular temples flocked by tourists and devotees round the year.

Brahma Temple in Pushkar dates back to 14th century, with parts of the temple got renovated from time to time. The grand architecture of the temple is indeed a fascinating one with the number of steps to reach the façade, the 21m tall red sandstone tower and the motif of hamsa, the symbol related to the ancient history of this temple. The presiding deity in the sanctum is believed to have consecrated by Adi Sankara in 78AD. The idol is seen to be with four heads and four hands with rosary, books, kurka and kamandalu. The crossed leg pose of the deity represents Viswakarma pose, symbolizing the role of a creator. The consorts of Lord Brahma, Savitri and Gayatri sit on His both sides.

The full moon day of Lunar Month Karthik as per the Hindu calendar is usually the most auspicious day in Brahma Mandir. On that day, the temple witnesses thousands of devotees , taking bath in the lake and worshipping Lord Brahma. The religious rituals and practices are quite interesting to watch. This annual grand celebrations take place normally between October and November.

Dress code is like in any other indian temple, to wear costumes covering your legs and shoulders in order to respect the culture here.

Brahma Temple at Pushkar is kept opened on all days from sunrise to sunset.

Brahma temple can be visited in any time of the year. Still, between October and February, you will have many colorful occasions to be a part of in the religious celebrations hosted.

Brahma Temple is located at Pushkar, which is highly touristy in nature with easy access using multitude of transportations, drawing thousands of travelers from all corners of the world.