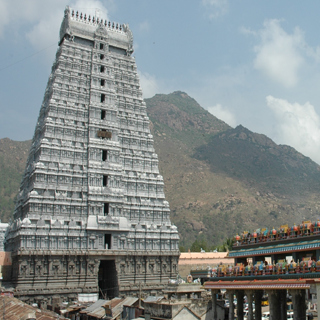 Tiruvannamalai, the most auspicious spiritual centre in Hinduism, is the home for the magnificent Shiva temple where Lord Shiva graces in the name of Arunachaleshwar. It is believed that Lord Shiva himself is in the form of a huge mountain. Tiruvannamalai temple is acclaimed as one of the FIVE cosmic elements, FIRE.

Dating back to very ancient times, legends refer to Tiruvannamalai as one of the holiest places and it had been the home for many saints and the Hindu mythology name them as “Siddhas”’. Scientifically, the herbs in the mountains have the power of healing your diseases and spiritually it is believed that worshipping the mountain and Lord Shiva in the temple itself is a divine experience.

Tiruvannamalai is very popular among the tourists and devotees for two reasons. On every full moon day, you can find lakhs of people on circumambulation around the foot hill of the mountain. With the arrangements of lighting and refreshments around the circular path, people go around for fourteen kilometres and the number of devotees seems to be increasing every year.

Next is the Karthigai Deepam festival which falls during October-November every year. It is remarkably a grand festival and it has its own religious significance here, though Karthigai is celebrated in all the temples and houses. A huge cauldron is filled with ghee and placed atop the hill on the festival day and lit during the auspicious hours. The light is visible around several kilometres and people from the surrounding regions are able to worship the light, which is believed synonymous to Lord Shiva himself in the form of fire.

While strolling through the streets, you can see lot of Ashrams and the most prominent of them are the Ramana Maharishi Ashram and Yogi Ram Surath Kumar Ashram. You can witness many foreign nationals settled here in search of the life and its meanings through different spiritual practices. On the whole, Tiruvannamalai gives you a unique experience unlike the regular tourist destinations.

Plan a tour to Tiruvannamalai and get enlightened with a different and divine experience.

Air : Chennai is the airport nearest to Tiruvannamalai at a distance of 200 km. The international airport at Chennai is well connected to all the popular countries. From Chennai, you have number of choices to reach the destination by surface.

Train : The railway station at Tiruvannamalai is well connected to all the major cities of the state and from other states, you can reach the destination via Chennai.

Road : The road network to reach Tiruvannamalai is well connected with all other major cities across the state.