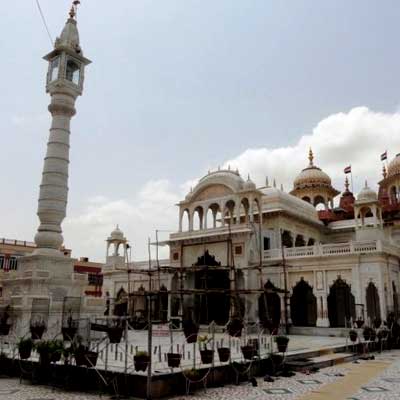 Chandanpur, a remote place at a distance of 110kms from Sawai Madhopur had become a centre of Jainism. following the excavation of an idol of Lord Mahavir.

Later after many centuries, another idol of Lord Mahavir was excavated around 200 years ago. A grand temple was built after the excavation and the village has become a very popular Jain Pilgrim Destination. Visitors are spell-bound with the beauty of this temple built in white marble.

Popularly known as Digambara Jain Athisaya Kshetra, Sri Mahaveerji has been the all time preferred destination for the people following Jainism. The idol of Mahaveer was found on a mound and miraculously, the villagers found a cow pouring its milk in the mound spontaneously. On excavation, they got the idol and the temple was built between 17th and 19th centuries.

Devotees and tourists from India and abroad throng this temple, marvelling the rich heritage and elegant architecture. The grandeur of the temple is awe-inspiring with tall images of Tirthankaras and mythological sights and scenes as beautiful paintings on the walls. The Coral colored sandstone statue of Mahaveer in the sanctum is seen along with the icons of Bhagwan Pushp Dant and Bhagwan Adinath on both sides. Other noticeable Tirthankaras are on different places inside the temple.

Besides the regular rituals and evening arti practiced in the temple, the annual festival in April to earmark the birth anniversary of Mahaveer, popularly known as Mahaveer Janma Kalyanak draws millions of people from all over the world. The festival lasting for five days is packed with vibrant poojas and devoted rituals, indeed colourful series of events to cherish.

Cover your head while entering Sree Mahaveer temple. See to that you don’t wear black dresses while visiting the temple. Otherwise, the common dress code followed in other Indian temples holds good here.

Sree Mahaveerji temple is kept opened from 8AM to 6PM.

Devotees and travellers visit Sree Mahaveer Temple round the year. Still months between October and March are ideal to enjoy the pleasant climate and ambience.

From Jaipur International Airport, Sree Mahaveerji Temple can be reached by travelling approximately two and half hours’ drive. The village has its own railway station connecting all the major cities of Rajasthan. The well laid roads are easily accessible with multitude of transportation modes.