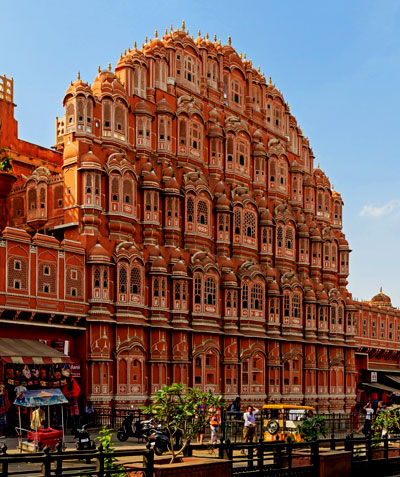 Hawa Mahal Most iconic attraction of Jaipur, the “Pink City” in Rajasthan, the popular tourist center in India, flocked by global and domestic travelers, attracted by the wonderful forts, heritage palaces and vast deserts.

Hawa Mahal, stands including an excellent beehive structure reflecting a honeycomb. The numerous windows and jhorakhas keep the places inside the Mahal, windy all the time.

Aptly named as Palace of Winds, Hawa Mahal was the main location from where the Royal ladies of Rajput dynasty were able to witness the busy streets and shopping areas and also royal and religious processions.

The entire structure stay erect for centuries owing to its architectural strategy that the entire building is built without any proper foundation, categorized as the only such building in the world.

The spectacular amalgamation of Hindu, Mughal and Rajput architectural styles is an awe-inspiring one depicted in every other part of this wonderful building.

Plan to visit Hawa Mahal this time while exploring Rajasthan, the most visited state of India.

How to Reach Hawa Mahal :

Air : Hawa Mahal is at a distance of 12 kms from Jaipur International Airport. Public transports or taxis can be hired to reach the venue.

Rail : The rail head of Jaipur connecting various parts of Rajasthan is at just 11kms from Hawa Mahal, which can easily be crossed with multitude of transports.

Road : Jaipur has good network of roads connecting it with major Indian cities. NH 8, NH 11 and NH 12 are the main national highways connecting the city of Jaipur with other citiesThere are good services of Buses and Private Taxis available.