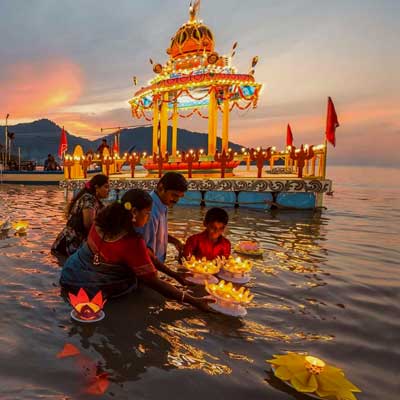 Theppakulam means a large area of pond. The Theppakulam water tank is one of the biggest water tanks in South India that belongs to Mariamman temple in Madurai. This tank is connected to River Vaigai through an ingenious system of underground channels. This tank was built by Thirumalai Nayakar. It is approximately 305 meters long and 290 meters wide, almost equal to Meenakshi Amman Temple.

It was only on the day of Thaipoosam, Goddess Parvathi gifted the Vel (spear) to Lord Murugan when he went for a battle with a demon named Soorapadman.

In those days for the first time, this festival was celebrated by King Thirumalai Nayakkar & now every year it is celebrated on his birthday.

Every year, float festival is celebrated in this tank during the month of January – February, especially on the day when Poosam star prevails during the month of Thai as per the Tamil Calendar, on a full moon night at Shri Mariamman temple – Madurai. The area around the pond and the centre mandap both will be decorated with multi coloured bright lights.

On this day, early in the morning, the Idols of Sri Meenakshi Amman and Lord Sundareswar both are taken in a decorated palanquin from Meenakshi Amman Temple to the Theppakulam & placed in a colourful floral decorated boat to go around the centre mandap thrice in the water tank. Colourful crackers are burnt which would be a real feast for our eyes. This festival is unique in its celebration and hence attracts a large number of tourists. A huge crowd will be gathered at this place to witness this colourful festival. After the festival is over, at night, the idols are brought back to Meenakshi temple. Due to these celebrations, Shri Meenakshi Amman Temple would remain closed on this day.