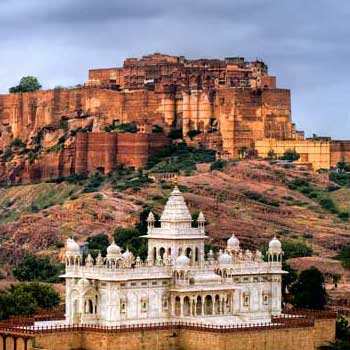 Mehrangarh Fort One of the best preserved forts in India is Mehrangarh Fort in Jodhpur, popularly known as the Sun City in Rajasthan, the North Indian state most frequented by global travelers. The most impressive citadel standing on a vertical cliff catches your attention even from a faraway distance.

The entire structure of Mehrangarh fort took over 500 years since the construction work was initiated in the 15th century and followed by many rulers in different periods.

Thus, Mehrangarh fort exhibits a beautiful amalgamation of different architectural styles giving it a unique identity which cannot be normally witnessed in any other forts in India. When you move from one part of the fort to the other, you can explicitly feel the change in the time period, making your visit to this fort so remarkable.

Visiting Hours: Mehrangarh Fort is open to public from 9AM to 5PM daily.

Sound and Light show narrates the history of Amber Fort with special effects.

Please make it a point to wear comfortable clothing, shoes and hat to climb up the stairs.

How to Reach Amber Fort :

Rail : The rail head of Jodhpur connecting various parts of Rajasthan is at just 7 kms from Mehrangarh Fort, which can easily be crossed with multitude of transports.

Road : Jodhpur has good network of roads connecting it with major Indian cities. There are good services of Buses and Private Taxis available.