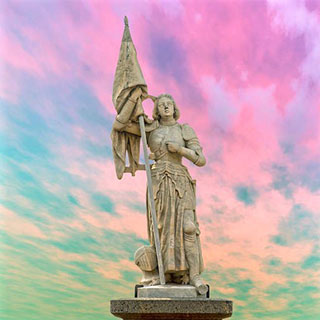 Pondicherry is the most prominent tourist destination visited by tourists from all corners of the country and globe as well. More specifically, it is a perfect weekend getaway from Chennai and Bangalore and you can see hundreds of tourists thronging the city during the weekends, staying away from the hustle bustle of their regular schedules and enjoying the serene tranquillity of Pondicherry.

Pondicherry has plenty of choices for every type of traveller. The city has something to offer to make any kind of visitor more joyful with its architecturally splendid buildings, sumptuous cuisines and tranquil beaches. Out of the several monumental locations, the statue of Joan of Arc is indeed a spectacular work to enjoy during your trip to Pondicherry.

History has given a special place to Joan of Arc who owns lot of achievements within the short span of 19 years of her life. Nicknamed as the "Maid of Orleans" , Joan of Arc is acclaimed as the Heroine of France. She is also honoured as a Roman Catholic Saint. Born and brought up in Domremy, a region in the North-East pf France, Joan of Arc had the vision of supporting Charles VII. She wanted to contribute in the Hundred Years war to relieve France from the domination of British Government. Even at the young age, Joan of Arc had developed this burning desire to do something miraculous to achieve her goal.

King Charles VII recognised the ambition of the young girl and aspired to send her to the siege of Orleans and made her contribute to be a part of the relief mission. Following the action, several other victories followed and King Charles VII was crowned at Reims, the region in the east of France.

At an unexpected moment, Joan of Arc was captured by the British Troupes on 23rd May 1430. She was put under trials. Several charges were framed against her and after one full year of imprisonment and enquiries, Joan of Arc was sentenced to death on 30th May 1431 when she was only 19 years old. The young girl was thought to have been eliminated from the pages of history. But the challenging moments and the achievements of Joan of Arc are still glorious

After a long period of Twenty Five years, the judgement on Joan of Arc was rewritten and she was proved to be innocent and the Government declared her as a martyr. This historically significant judgement gave an unique accolade to Joan of Arc and she was canonized in 1920. She is revered as one of the nine secondary patron saints of France.

Chunnambar Boat House, Promenade Beach, Gandhi Mandapam, Botanical Gardens, Le Café restaurant are some of the other interesting locations in Pondicherry which is also a perfect weekend getaway.

Train : From the Pondicherry railway station, the Joan of Arc statue is at an easily accessible distance.