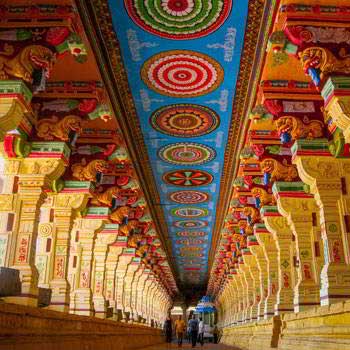 Ramanatha Swamy Temple situated in the island Rameshwaram in the down south of Tamil Nadu,is the most sacred shrine for Hindus across all sections in India . This is worshipped as one of the twelve Jyothirlingha Shrines situated across the country. Jyothirlingam refers to the form of the Part less column of fire representing the eternal God from which Lord Shiva appeared as Lingam for worshipping by His devotees.  This temple is one of the four sacred shrines to be visited by every Hindu in his life time, instituted by Adi Sankara, called Char Dam. The other three being Badrinath, Puri and Dwaraka. This is the sacred place where Lord Rama is believed to have done special rituals to the God. There is one more significance about this place is that this temple has the longest corridor in the world. This temple stands as a testimony for the unity between Saivaites and Vaishnavites in India. Because Rama, the seventh incarnation of Lord Vishnu has worshipped Lord Shiva in this auspicious place.

When Rama returned back from SriLanka after conquering the King Ravana, halted at Rameshwaram. He advised his monkey lieutenant Hanuman to bring a Lingam from Mount Kailash to install and worship at Rameshwaram. As Hanuman could not return in time, Mother Sita created a small Lingam with sand and Lord Rama worshipped it and that is housed inside the sanctum with a name Ramanatha Swamy. Still, Rama has instituted the procedure that the Lingam brought by Hanuman called Vishwalingam , should be given first reverence in all the daily rituals  and that is followed even today in this temple.

The temple is believed to exist since the ages of Ramayana. The thatch roofed temple existed in the 11th and 12th centuries has seen so many vagaries and the Kings of Pandya Dynasty and Tanjore Sarfoji Kings have contributed to the extension of this temple in a very magnificent manner. From the inscriptions we come to know that the renovation work of the sanctum was carried out with the stones sent by the Royal family of Triconamalee, Sri Lanka.

The temple has separate shrines for the presiding deity Ramanatha Swamy and His consort Goddess Parvadhavardhini along with various other Gods as you find in other Shiva Temples. There are four huge towers built on all the four directions out of which two are the Gateway Towers. The tourists are stunned by the striking corridors of this temple running between massive colonnades raised above platforms of five feet height. The outer corridor of this temple is the longest in the world with symmetrical figurines sculpted on the pillars on both sides of the corridor. The architectural elegance and engineering mastery can be well appreciated only when one walks through this longest corridor witnessing the works of our forefathers who were the real achievers without any ultra-modern technologies or facilities.

There are twenty four holy water bodies called Theerthams in this temple and taking a shower in all these is considered to be a very sacred ritual. Out of the 24 water bodies, the sea shore called the Agni Theertham tops the list and you can see devotees taking showers in all these tanks throughout the year. It is the religious practice of any Hindu to go on a round trip pilgrimage at least once in his life time. One has to start the pilgrimage from Rameshwaram , proceed to Kasi or Varanasi, worship Lord Vishwanath there and come back to Rameshwaram to complete the pilgrimage. This is how, Rameshwaram is a very important pilgrim center for devotees from both South and North India and Rameshwaram is flooded with devotees all through the year.

Rameshwaram Temple, for its rich tradition and heritage, splendid architecture, engineering marvel, is a must see pilgrim place by every tourist visiting Tamil Nadu. Come and enjoy the fascinating premises and get the blessings of Lord Ramanadha Swamy !

Lord Ramanatha Swamy awaits to bless you between 5 AM to 1 PM and 3PM to 8PM everyday.

By Air:Nearest Airport is Madurai from where the temple is at a distance of 165 kms.

By Road:The city Rameshwaram is well connected to the nearest major cities of Tamil Nadu like Trichy, Madurai and Coimbatore. Buses ply frequently to other parts of the state, so, reaching Rameshwaram by Road will not be a tedious task.