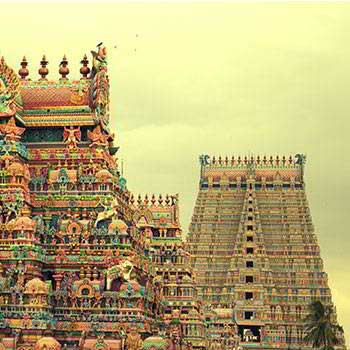 Srirangam is an island between the rivers Cauvery and Kollidam (Coleroon) which is a place of worship for the Srivaishnavites. It is recalled in the history as “the Utopia of Hindus”. Srirangam tops the list of the 108 holy places for Lord Vishnu called Divyadesams mentioned in the holy canon of SriVaishnavites, Naalayira Divya Prabhandham.

Sriranganatha Swamy temple in Srirangam attracts visitors across the world throughout the year. This is the biggest functioning Hindu Shrine having a circumference of 4 kms, seven prakaras and 21 towers. Out of the 21 towers, the main tower at the south gate of the temple called the Rajagopuram is 236 feet tall, bringing it the fame of being the second tallest in Asia.

Srirangam has a thriving economy from tourism and the temple is one of those overcrowded round the year. The island is connected to the Trichy City by a bridge built on the Cauvery river. Ramanujar, fondly called as Udaiyavar stayed in this temple for many years and restructured the functional strategies of the temple which is followed even today. Out of the several functions celebrated throughout the year, Vaikunda Ekadasi(Paradise Tour), Vasanthothsavam, Brammothsavam,Serthi Sevai, Araiyar Sevai are of very high significance. It is said that, Poet Kambar staged his epic “Kamabaramyanam” in this temple and Lord Narasimha approved his work here.

By Train- Srirangam railway station is an important one where more than 50 trains halt in this station before passing through.

By Road- Trichy is well connected with other cities of the state with a well-maintained network of roads and the temple can easily be reached by prepaid taxies or public transport.