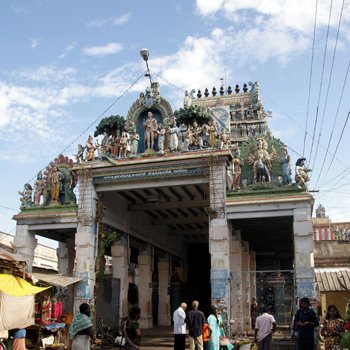 Lord Muruga graces from his sanctum sanctorum with a charismatic look and a majestic appearance. The sacred ash and the vermillion mark adorn his forehead, the spiritual staff in his hand adds on to his mesmerizing outlook; on the whole he beams with the delight of being the mentor of this world.

Saga Behind the Temple:

A million years ago Bharma the creator of the world was trapped in a predicament because of Muruga’s question; Muruga asked him the meaning of the Pranava Manthra OM and told him that he would imprison him if he didn’t know the meaning. Bharma know nothing about Pranava Manthra, so as per the rule he was imprisoned. Seeing all this Lord Shiva went blue because he also didn’t know the meaning so he revealed his ignorance to Muruga and asked him to teach the meaning. But Muruga said that only if one surrenders himself, shedding behind all his pride, wealth and ego, he will teach him. Ergo Lord Shiva turned himself to be a pupil, accepted Muruga (his son) as his tutor and got the knowledge from his own son and hence this place is later named as Swami Malai.

The temple is anchored in an artificial hillock and is led by 60 steps which represents the 60 Tamil years. These steps are held in par with the sacred 18 steps of Sabari Malai. Special poojas are done to these steps during Tamil New year.

Lord Murugan’s devotees are pious and dedicated; they do tonsuring, carry milk pots, kavadis and pierce miniature vel (staff) in their body.

The most handsome God is Lord Muruga. He is also very lavish in giving boons to his devotees and in delivering them from the obstacles in their lives and blesses them with all prosperity. The idol in the sanctum sanctorum is donned with all kinds of dressings starting from sacred ash make up to Emperor Make up.

This temple is located in the core of Kumbakonam and can be easily reached.

Bus:Buses from all main cities in Tamil Nadu will connect you to this temple. Kumbakonam bus stand is at a walkable distance from the temple.

Train:All railway stations in Tamil Nadu have trains to this area.

Airport:The nearest airport to this temple is in Trichy and Madurai.