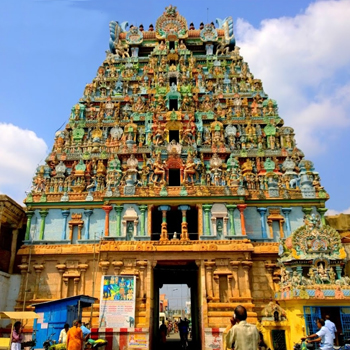 The city on the banks of the river Cauvery, famous for its monuments like Rockfort, Srirangam Temple. One among those historic places is the Jambugeshwarar Temple at Tiruvanaikoil visited by hundreds of pilgrims every day for its architectural design and the blessings showered by the Lord Shiva.

The Jambugeshwarar temple is otherwise called as “Appu Sthal” where Appu means water and Sthal means place in Sanskrit. It is quite amazing to see that the Lingh idol in the Sanctum Sanctorium is partially or fully immersed in water all through the year irrespective of the water levels in the nearby river Cauvery. The architecture  of this temple is around 1500 years old , but still being witnessed as a testimony of the engineering knowledge our ancestors possessed. All you need is four to five hours of your time to witness the architectural wonder of the temple and particularly the mystic beauty of the hundreds of bilaterally symmetrical pillars built on both sides of the corridor on your way from Lord Shiva’s sanctum to his counterpart’s.

The temple is so big that there are five streets surrounding the sanctum sanctorium. The outermost street of the temple is a circular path of few kilometers distance. People used to have a pilgrim walk covering the distance every month on a full moon day and it is quite interesting that the number of pilgrims increases month on month.

Another thing which makes us spell bound in this temple is the idol of the Goddess Akilandeswari which is one among the very rare huge statues found across the country. As the legend says, since the time of inception, she was uncontrollably furious in olden days, punishing the devotees without any reason. Once, the Saint Adi Sankara, who introduced the Advaita principle to the world, visited this temple. Finding her so furious, he adorned her with two big ear rings by name “Thaadangam” and made her staying cool always and blessing her devotees with whatever they have wished for. You can witness those earrings even today.

One more special event which you can never see in any of the temples in India is that, every day exactly at 12 noon, the priest in the shrine dresses up as Goddess Akilandeshwari and does the Pooja to Lord Shiva which is a feast to the eyes and you may get the chance of being greeted by an elephant too.

Panguni Brahmothsavam during March-April, Aadi Pooram during July-August are the festivals celebrated in a very grand manner. All Fridays of the Tamil months Aadi and Thai are very auspicious in this temple and thousands of devotees visit to worship Goddess Akilandeswari. Navarathri is yet another festival during October – November which deserves a special mention here. The grand decorations and the idols of Gods and Goddesses arranged beautifully called “Kolu” attracts hundreds of devotees all through the nine days ending at Vijayadasami, denoted for the victory of Good over the Evil.

Air:Trichy is the nearest airport, from where the temple is very near located at a distance of 10km.

Rail:
Trichy railway junction is one of the busiest railway stations, where trains from all major cities of South India halt. From the railway station, the temple is at a distance of 13kms.

Road:Trichy is well connected with other cities of the state with well maintained network of roads and the temple can easily be reached by prepaid taxi or public transport.