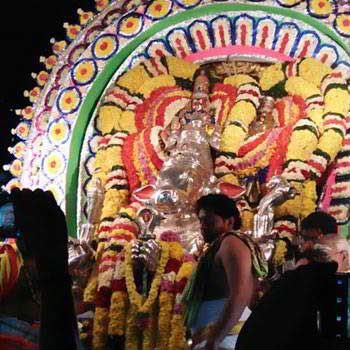 In the City of Salvation, Thiruvannamalai, stands the majestic temple representing one of the Five elements of the cosmic elements of the earth, “Fire”. The huge mountain itself is worshipped as Lord Shiva and the architecturally beautiful temple is more than thousand years old built by the Early Chola Emperors. Lord Shiva is believed to have manifested himself as a huge column of fire as a spiritual revelation that God is omnipresent.

From the Hindu mythology, references state that, Once, there was a conflict for superiority between Lord Brahma and Vishnu and Lord Shiva appeared before them as a huge column of fire suggesting them to find out his feet and head. Vishnu chose to go down and Brahma went upwards. The column of fire was so huge that both could not succeed  in their attempts. While Vishnu conceded his defeat, Brahma lied that he went atop and he was punished suitably.

Yet another story is that when there was a love tiff between Lord Shiva and His consort Parvati, she playfully covered his eyes. Though it was for a very  short span, the entire world was in dark and came to a standstill. Lord Shiva appeared as a huge column of fire atop the Thriuvannmalai Hill to light up the world and everything resumed normal.

The temple is more than thousand years built in the 9th century. But the saivaite saints have been glorifying the Thiruvannamalai mountain even before that as we could refer to the songs in the 7th century saivaite canon called Thevaram. The temple has been patronized by various Kings and also it has stood against the invasions made by Kings of other religions.

The architectural styles followed in the Chola and Pallava dynasties are well reflected in this temple. The four gateway towers mark the territory of the total area of 25 acres sprawling inside the temple complex beautifully constructed with five precincts around the sanctum.

The presiding deity is the Annamalaiyar also called as the Agnilingam representing the cosmic element Fire. His consort Parvati Devi resides in the second precinct worshipped as Unnamulai Amman. As practiced in other Shiva temples, there are more sub shrines for the Gods Ganesh, Durga, Dakshinamurthy, Bairavar and Nataraja. There are many halls which are believed to have hosted the functions during the ancient times. The significant one among them is the thousand pillared hall in the fifth precinct. People visiting the hall are awestruck by the intricate carvings and the Yali sculptures. Yali is a mythological animal with a Lion’s Body and an Elephant’s head symbolizing the power of Nayak Dynasty.

Festivals are celebrated throughout the year in this temple, out of which, Brahmotsavam is the most popular and significant one which has been in practice right from the period of the early Cholas. Celebrated for ten days during the Tamil month of Karthigai, that is, between November and December. A huge lamp with a capacity to hold three tonnes of Ghee is lit atop the hill to mark the conclusion of the festival and that is popularly known as the Kathigai Deepam attended by Lakhs of Devotees. The presiding deity circumambulates the mountain on this special day blessing all his devotees. This year the mega Karthigai deepam festival falls on December 2nd =, 2017 as per the Gregorian Calendar.

A minimum of ten lakhs devotees walk around the foothills on full moon days of every month in this holy place. The number of pilgrims gets increased every month and it has become world renowned ritual these days. This is called as Girivalam and circumambulating the hill is believed to reply all our prayers to God.

Hindu philosophy has marked very few temples across the country to represent the significant points in the human body and their related issues. In that list, Annamalaiyar temple is known as the Manipooraga Chakra. When worshipped, this shrine will throw light on your spiritual ignorance and offer you salvation from the cyclic births and deaths on this earth.

How to reach the Temple?

By Air:The nearest airport to the temple is Chennai from where the temple can be reached travelling by surface in less than four hours covering a distance of 172kms.

By Train:The railway station is located on the Bengaluru – Pondicherry rail corridor and well connected to other cities and the temple is very close to the station.

By Bus:Thiruvannamalai is well connected to all parts of the state as well as with the neighboring states.