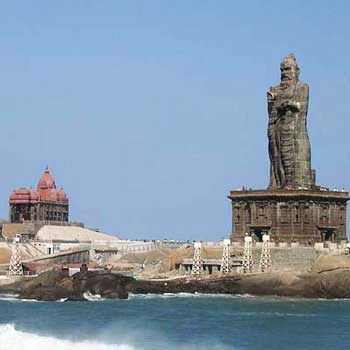 Kanyakumari is in the foot of Indian Peninsula and is the southernmost tip. The mesmerizing Sea and enchanting mountains make this city a perfect place for a complete break from the rat race. It is one of the favorite tourists spot in Tamil Nadu with lots of places to see around.

The mind blowing sun rise and sun set are a special features here and a lot of heads gather along the shore in early morning to admire this rare show. It is also the store house of art and architecture since many centuries ago. Many monuments have been erected in order to venerate many notable personalities.

Vivekananda rock memorial stands atop a rock in Vavathurai. As the name suggests, this stunning monument was built in reverence to Swami Vivekananda. There is meditation hall and a book store with profound collection of Vivekananda books.

Behold the smashing 133 feet statue of Thiruvalluvar beaming with pride. The sculpture is meticulously done to the extent that each feet of the statue represent one chapter in Thirukkural. This art is submitted to the veteran Tamil poet Thiruvalluvar.

Gandhi Mandapam is built to pay homage to Mahatma Gandhi ‘The Father of Our Nation’. The builders have used a different architectural style so that on second of October the first ray of the sun falls on this building at the perfect place where Gandhi’s ashes have been kept.

This memorial was built in memory of the people who have died in the tsunami, which had brought drastic changes in many countries including India and had gulped about 3lakh people. This monument is so very exclusive and so is appreciated by all.

This 3000 years old temple is in the shores of Laccadive Sea and is dedicated to Goddess Durga. This temple is one among 108 houses of Shakthi and is considered to be extremely powerful.

Other places to see:

There are some more places of interest in and around Kanyakumari including Kamaraj memorial and Ayya Vaikundar Nizhal Thangal.

Transport facilities are not a problem, as the bus stop is active all day. Being a tourist spot cabs and vans are in surplus.

The southern railway connects Kanyakumari to other cities across India. A few yards from railway station is the beach.

There is no airport in Kanyakumari but it can be reached from the nearest airports which are at Madurai and Trivandrum.