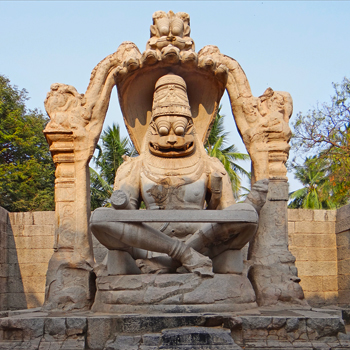 The place found to be so mysterious, at the same time, filled with the benevolence and blessings of the God is Ahobilam, which is in the Karnool District of Andhra Pradesh. The Lord Narasimha, in his self- manifested form, abodes at the base of the mountain called Lower Ahobilam. There are nine temples in a circumference of 5kms in this mountain. Nine different forms of Lord Narasimha are housed in these nine temples. In response to the prayers of Garuda Baghwan, Lord blessed him with His presence in nine different forms amidst the dense forests in the mountain. That is why Ahobilam is also called as Garudagiri or Garudasailam.

Ahobilam is believed to be the place where, Lord Narasimha killed the demon King Hiranyakashipu. From the different epics in the Hinduism, we are able to understand that Prahaladha, son of the king Hiranyakashipu was a fanatic devotee of Lord Vishnu. Despite his father’s advices and punishments, Prahaladha denied to worship any god other than Lord Vishnu. Infuriated by his acts, the king decided to kill the boy. He took the help of his sister Holika and brought the boy to the pyre. But, unexpectedly, Holika was killed in the fire and prahaladha stood unaffected by the fire. It happened at that moment that, Lord Vishnu, came out one of the pillars in the form of Lord Narasimha who was very fierceful at the injustice done to his devotee. King Hiranyakashipu, as a result of his hard penance, got the boons from the God that he could not be killed by man or animal, any kind of weapons, during morning or night, inside his house or outside anywhere in the world. So Lord Narasimha appeared with a Lion head and human body, kept him on his lap. Using his nails, he killed the demon king and blessed prahaladha with salvation.

India is a peninsular country surrounded by water on three sides and range of mountains on the fourth side. View of the Eastern Ghats makes you enjoy the scenic beauty as well as wonder the mysteries hidden in the dense forests. According to the different sacred books of the Hindu culture, the entire range of Eastern Ghats is likened to the Aadhi Seshan, who is the serpent bed of Lord Vishnu. The place where his head lies is Tirumala Tirupati , body is Ahobilam and the tail portion is Sri Sailam. You can easily relate that all these three places are revered  as important pilgrim places.

Out of these three, Ahobilam is the place believed to be the then palace of the demon king Hiranyakashipu. After he was killed by Lord Narasimha which is one of the incarnations of Lord Vishnu, this place had undergone several vagaries and evolved as a mountain and a place of abode for Lord Narasimha. The Vaishnavite Saint Thirumangai Azhwar, in his hymns stated about this holy place as “only the eternal God can come and visit all the nine temples and the ordinary human beings cannot”. The Nine Narasimhasthalas are :- 1. Jwala Narasimha 2. Ahobila Narasimha 3. Malola Narasimha 4. Kroda Narasimha 5. Karanja Narasimha 6. Bhargava Narasimha 7. Yogananda Narasimha 8. Kshatravata Narasimha and 9. Pavana or holy Narasimha.

Ahobilam is the sacred place where along with the nine temples, there are two more important places to be visited. The temple for Prahaladha varadhan and Ugra Sthambam.