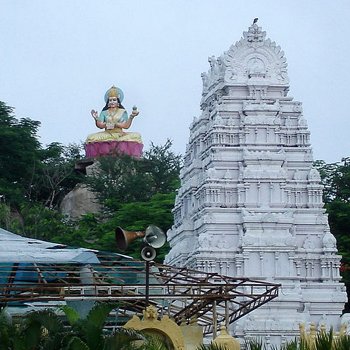 Every temple in India has its own legend, historic and spiritual significance which revives the faith in every devotee irrespective of the sect or he or she follows.

Among the thousands of temples in India, the Gnana Saraswati temple located in Basar of Telangana state of South India holds a prominent place in the spiritual arena.

Like every other ancient temple in India, the legends behind this Gnana Saraswati temple is so fascinating. After Gurukshetra war in Mahabharata, Saint Vyasa was searching for a peaceful place meditate and finally arrived at Dandakaranya.

Pleased at his meditation and penance, Goddess Saraswati appeared before him and he asked for a boon that she should stay there forever and bless everyone around.

Goddess Saraswati agreed and to Vyasa’s surprise, the trinity of Goddesses Saraswati, Mahalakshmi and Kali self-manifested there which is the present day Gnana Saraswati temple. The region where Saint Vyasa meditated is called Vyasapuri, got refined as Vyasara and over the periods it has taken the name as Basar, legends say.

The structure of the temple is not so grand like other procedurally constructed temples across the country. There is no exquisite carvings, paintings or grand structures in the temple. Just a few feet away from the temple entrance, there exists the sanctum with the presiding deity Goddess Saraswati holding Veena in her hands.

It is peculiar to note that the idol is anointed with turmeric. Few meters in the away in the same premise, there are separate sub shrines for Goddess Mahalakshmi and Goddess Kali. Devotees and tourists throng the temple to worship the trinity.

The temple witnesses lot of young parents with their little children arriving here to conduct the most important function of “Akshara Abhyasam”, the child’s first step in the learning process. As Goddess Saraswati is worshipped for attaining epitome in education and arts,this function is done almost round the year and is a colourful event to witness children eagerly trying their maiden attempt to write and.

Vasanth Panchami, Maha Shivaratri, Vijaya Dasami and Navarathri are the most popular festivals witnessing thousands of devotees from Telangana and Maharashtra .

Plan to include a visit to Basar Gnana Saraswati Temple during your tour to Telangana this time.