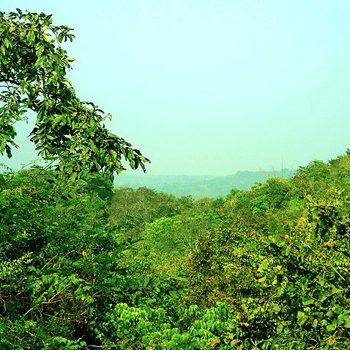 Located at a distance of 25kms from Badrachalam, Kinnerasani wildlife sanctuary is one of the most beautiful destinations sprawling across 157,010 acres of forest land. When we talk about wildlife sanctuaries, the dense woods and their habitats inclusive of rich flora and fauna will be of primary importance.

Kinnerasani wildlife sanctuary has everything mentioned above along with a gorgeous lake and densely forested islands inside the sanctuary is something special to explore, transforming the entire region into a magic land.

The wildlife sanctuary is a mix of dry deciduous forests with mixed varieties of trees like teak, bamboos and other terminals. Kinnerasani wildlife sanctuary is much more beautified by the rich fauna and the most popular of all the inhabitants of the woods are, Blackbucks, wild boars, chinkaras, jackals and Tigers form a good number of populations inside the thick forests.

June to October is considered to be the ideal period to visit Kinnerasani wildlife sanctuary. The lush green surroundings make your visit here more pleasant with favourable climate prevailing around. Post October, due to monsoon and other reasons, the residents of the woods used to get inside their dens, spotting them will be much more difficult.

Kinnerasani Lake, Deer Park, Eco Park, Holiday Home Glass House, Environment Education centre are some of the other popular attractions which the visitors will find more interesting, especially an amusing factor for children.

The predominantly tribal populated region, Kinnerasani wildlife sanctuary has got a spiritual reference to some of the events of the great Hindu epic Ramayana also, believed to have happened here.

Birdwatching, Jungle Safaris, Nature Photography are some of the highly recommended activities here to explore the beauty of the sanctuary to the fullest possible extent.

From Bhadrachalam railway station or from Hyderabad Airport, public transports or rented cabs can be availed to reach Kinnerasani Wildlife Sanctuary.