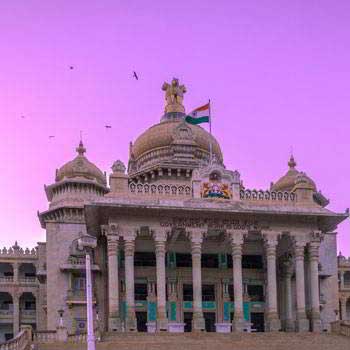 The legislative Assembly of the Karnataka state, renowned landmark in Bangalore, spreading over an area of 60 acres following the Dravidian Architecture is the Vidhana Soudha. It owns the credit that it is the largest Legislative building in India.

One of the most famous landmarks of Bangalore, the Vidhana Soudha houses the State Legislature and the Secretariat of Karnataka. The magnificent white building is spread over 60 acres of land and boasts of Dravidian architecture. It is also the largest Legislative building of India. This building dates back to 60 years, built by then Chief Minister of Karnataka Sri.Kengal Hanumanthaiah. Though this white palace reflects the Dravidian Architecture, there are evidences that the Rajasthani style has also been used.

The magnificence of Vidhana Soudha can best be understood with the piece of information that the building has 300 spacious rooms which can accommodate the staff of twenty two State Governement Departments. The stunning architectural beauty of this building attracts more number of tourists round the year. Though it is a drive pass and visitors are not allowed inside the building, we can witness number of visitors getting increased day by day.