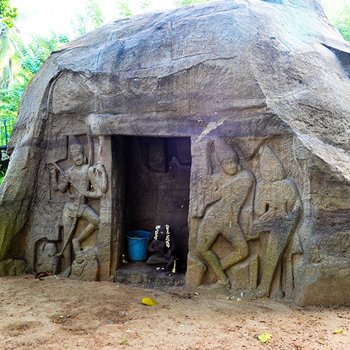 Rock cut cave is located in Vizhinjam. Vizhinjam is in Trivandrum city (the capital of Kerala). Kovalam beach is just 03 Km from Vizhinjam and the areas in and around Vizhinjam are famous for Ayurvedic treatment centre and internationally acclaimed beach resorts. Vizhinjam, the seaside village was once the capital of the many chieftains who dominated the southern parts of Kerala. Vizhinjam also was a former Dutch and British factory, of which nothing can now be seen.

Vizhinjam Rock Cut Cave, a historic spot which was left unnoticed for a long time. Vizhinjam rock cut cave contains the 18th century rock cut sculptures. The cave encloses a one celled shrine Dedicated to Vinandhara Dakshinamurthi, this is granite cave temple and the outer wall of the cave has unfinished sculptures of Lord Shiva holding a bow and dancing Lord Shiva with his wife Goddess Parvathy.