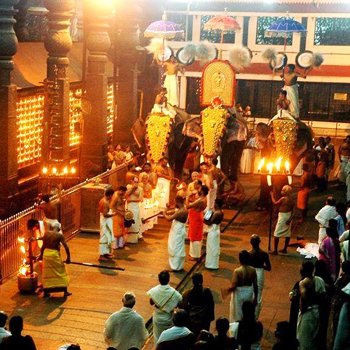 The famous Chottanikara Bhagawati Temple is situated in the Ernakulum district of Kerala, This temple is dedicated to Goddess Rajarajeshwari . The Divine Mother Rajarajeshwari is also known as Adiparasakthi.

The importance of this temple is that the goddess Adiparasakthi is worshipped here in three forms -: Saraswathy in the morning, Lakshmi at noon and Durga in the evening. There is an Idol of Mahavishnu ( Narayana) on the same pedestal and so the Deity is called Ammenarayana, Devinarayana, Lakshminarayana and Bhadrenarayana also.

Along with Lakshmi & Narayana there are idols of Brahma, Siva, Ganapathi (Ganesh), Subramanya and Sastha on the same pedestal.

The pleasant atmosphere in the temple give mental peace and harmony to devotees. People suffering from mental illnesses commonly visit this temple, as the goddess is thought to cure her devotees.

The main festival celebrated here is Chottanikkara Magham Thozhal in the month of Kumbh (February/March). On that particular day it is believed that the goddess in her special appearance , wearing gold ornaments, precious jewelry and innumerable garlands give darsan to her devotees and which will result in the fulfillment of all prayers and cherished desires.

Apart from that there some are months, events and festivals in Malayalm calendar, which are considered to be very important and is celebrated here by performing poojas and preparing feast for the pilgrims.