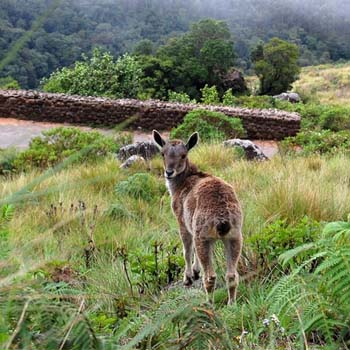 Eravikulam Wildlife Sanctuary is situated in the Idukki district of Kerala. Located in the Devikulam taluk, Eravikulam National Park was created as a wildlife sanctuary in 1975. Home to a significant population of endangered Nilgiri Tahr, a mountain goat found in South India, Eravikulam was declared a National Park in 1978. Spread over an area of 97 sq Km, National Park is located 15 km north of the hill station of Munnar. You can see the attractions of Eravikulam Wildlife Sanctuary on a Kerala Backwater tour. The landscape of South India National Park consists of undulating hills and grassy knolls. The natural forests in this area are known as Shola and National Park has several characteristic patches of Shola, where the native flora and fauna can be observed. The green hills and rolling slopes are a beautiful sight and have been compared to the Alpine meadows of Switzerland. Many species of rare plants including the Neelkurinji, which gives the Nilgiri Hills its blue color, can be seen in the forests of Eravikulam.
Among the hills in Eravikulam National Park is Anaimudi the tallest peak in South India, which rises to a height of 2694 m. Its name means the tuft of an elephant and refers to the hairy top of an elephant's head. The climate in national park is pleasant year round. It rains very heavily during the monsoon and inters can be frosty but days are mild and excellent for touring the sanctuary and observing animals in their natural state.
Some of the animals you can see on tours of Eravikulam Wildlife Sanctuary with Kerala Backwater are, over a thousand Nilgiri Tahr, tigers, leopards, jungle cats, civet cats, wild boar, sloth bear, Nilgiri Langur, squirrels, mongoose and snakes and reptiles. Many species of butterflies and moths are also seen. The Atlas Moth, one of the world's largest moths is also found in Eravikulam National Park.