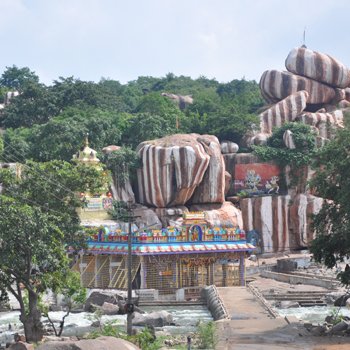 Having Goddess Kanaka devi as the prime deity, this temple is one of the most prominent temples in that region. People from other parts of India visit this temple to seek salvation from their sins. There is a small legend behind this temple.

The legend has it that Maharaja Parikshit performed “Sarpa Yaga” in this place to get rid of his sins. While he was performing the yaga, “Karuda” the celestial bird was transporting the divine snake and as he reached this place, seven drops of blood of the snake fell, which later turned into rivulets.

Then the King realized that taking dip in this sacred river will annihilate all his sins. From that day on people started to visit this temple and bath in this river to get rid of their sins.