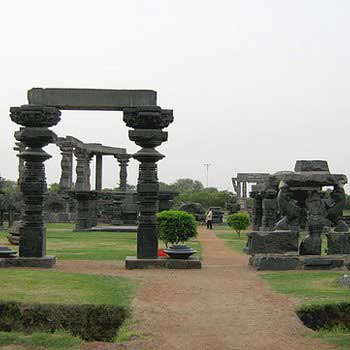 Warangal is a very pleasant city in Telangana, with a glorious past. Warangal is one of the cities which has a historical past, wonderful natural beauty and many man made wonders. All together Warangal is a best tourist spot in Telangana. There are many attractions in here which will keep you engaged and entertained throughout your stay. . Warangal has its own strengths being culturally rich and blessed with abundance by Mother Nature.

Warangal Fort belongs to the 13th century when it was constructed by King Ganapati Deva. The fort was intended to be his second capital. The exquisite carved pillars and arches add attraction to the fort. The fort houses a temple, which is dedicated to Swayambhudevi, Mother Earth. The fort being invincible was called the seat of power. The main fort consists of 45 towers. The entrance of the fort is built in South Indian architectural style. The fort is in ruins but still provides room for interesting study that aids in research of ancient history and sculptures.

The most important tourist destination at Warangal, is the Warangal fort. This grandeur fort was built in 13th century by the King Ganapati Deva. This fort was built as a second capital. The colossal pillars, with carvings, frescos, intricate sculptures and domes are interesting part of the fort. This fort also houses a small temple dedicated to Goddess Earth ( Swayambu devi). The main fort is built with 45 rooms, and a grand hall. The threshold of the fort is built in typical South Indian style. Though it’s hoary now, it serves as a testimonies of ancient era.

This 12 century piece of art is located near Hanamkonda-Warangal highway. The whole building is built in Kakatiyan architectural style, which was famous during 12th century. This temple has thousand pillars and is dedicated to three gods Shiva, Surya and Vishnu. The pillars are pure work of excellent craftsmen, who has poured their passion in each pillar and carved it, with such love, which can be realized as we behold its beauty. Rock cut elephants and the intricate stonework add beauty to the temple. Excellent sculptures and perforated screens need special mention.

Pakhal Lake is a man made one, which is believed to be excavated during 1213 AD. This lake is located in a perfect ambiance, with lush greens and mountains as the backdrop. This lakes sprawls across an area of 30 sq.km and offers a picturesque view. Adding to it, adjacent to the lake is the Pakhal Wildlife Sanctuary, which is a sweet abode to stunning range of plants and animals.

Amidst dense lush forest is the village Eturnagaram. For nature lover this village is a piece of cake. With river Godavari running close by, the Eturnagaram sanctuary offers breathtaking views. This sanctuary is one of the oldest sanctuaries established by Indian government. If we are lucky we can spot many rare animals, cheetah panther, jackals, wolf, deer, sloth bear and many more.  Both trekking and jeep safari is available at this sanctuary.

Kakatiya rock Garden is must to visit place at Warangal. This lovely garden is located near the fort temple. All the statues found here are carved out of rock and so it got its name “rock garden”. The whole garden looks like fairy land, with artificial falls, rock animals, beautify plants and shrubs.

Kakatiya Musical Garden is situated near Bhadrakali temple. The 15 acres of garden attracts tourists in great numbers. The musical fountain is a visual feast. Operated using a computer, the musical fountain is the star attraction here. Set against a backdrop of mammoth rock with artificial waterfall, the fountain is awe-inspiring. Boating is available here.

Bhadrakali Temple belongs to the 8th century and it is among the oldest temples constructed for Goddess Bhadrakali. The idol of Goddess Kali is enshrined in this temple, which is situated on a hill. The ancient temple was built during the reign of Kakatiya Dynasty. The construction bears the influence of Chalukya architectural style. The rock formations that were naturally formed around the temple make the place more serene.

Flight : The nearest airport to Warangal is Hyderabad international airport which is at the distance of approximately 140 kms. Being one of the major cities in India Hyderabad Airport is well connected to all places with in India and outside the country. There are regular flight to cities like Chennai, New Delhi, Bangalore and Mumbai.

Train : Warangal has its own railhead that also connects Chennai and New Delhi. It is well linked with other major Indian cities. The trains are frequent and available in all the categories, namely super-fast, express and passenger.

Bus : Warangal has good frequency of busses that connects all major parts of India. For Hyderabad there is surplus buses that runs for every five minutes.