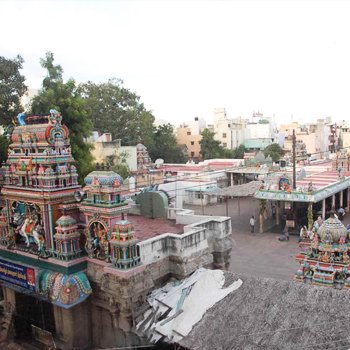 This age old temple is anchored in the heart of Madurai city; next to Meenakshi sundareswarar temple. The lord here was created by Lord Siva himself. The speciality of this temple is that; unlike the other temples of Lord Shiva, here the main shrine faces the west – instead of East and lord Shiva himself offered pooja to the Lingam here.

It is a rare sight to see the Lord facing the west and posing in worshipping form. The devotees who visit this temple are lucky to witness both Lord Shiva as well as the lingam. The devotees are allowed to have a rear side Dharshan of Lord Siva and Goddess Meenakshi performing Pooja to the lingam.

Being a shaivite temple, all important festivals of Lord Shiva are celebrated in grandeur. Amidst them Maha Shivaratri, Pradosham and Brahmotsavam are notable

This temple is located in the heart of the city and is few yards away from the central bus stand and railway station.

Bus : All busses to Madurai Periyar central bus stand will take you to this temple.

Train : Madurai is the nearest railway station and the temple can be reached within ten minutes.

Airport : Madurai is the nearest airport.