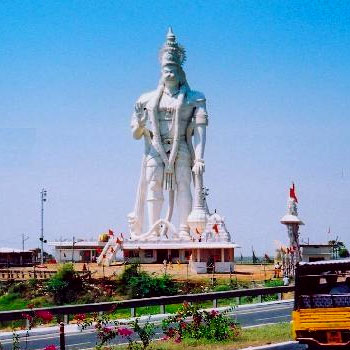 Situated in the apex of Krishna Delta flanked by the Budameru River on the north and Indrakiladri Hills on the west is the city Vijayawada, the third largest city of the South Indian state Andhra Pradesh. The best season to visit Vijayawada is between October and March.

The interesting legends about this city talks about the blessings Arjuna got from Lord Shiva in the Indrakiladri Hills and the paramount victory of Goddess Durga over the Demon Kings. As the Goddess victoriously won the battle, she was called as Vijaya(meaning victory) and thus the name of the city Vijayawada.

The city Vijayawada has a long history of being ruled by Chalukyas, Krishna Deva Raya and Poosapati Kings. During the reign of these Kings, the city saw a tremendous development and became the most favoured religious centre for Hindus Buddhists. The Poosapati King Madhava Varma built the famous Kanakadurga Temple in the Indrakiladri and even today it is famous among the devotees.

The city transformed into an industrial hub after the construction of the three major irrigational canals, Ryves, Eluru and Bandar. This made Vijayawada one of the prominent cities in Andhra Pradesh in the pre-independence period itself.

The major tourist attractions of Vijayawada includes the famous Mangalagiri Temple and Kanaka Durga Temple. The Buddhist sites like Amaravati,Gudivada and Ghantasala attracts large number of tourists throughout the year.

The other tourist attractions are, Victoria Museum, Mogalarajapuram caves, Prakasham Barrage, Hasarat Bal Mosque, Gundala Matha Shrine and Bhavani island. Besides the temples, monuments, water reservoirs, there is yet another tourist spot called the Kondapalli Reserve Forest sprawling over an area of 121.5 sq.kms from where the soft wood are sourced for the famous kondapalli toys.

How to Reach Vijayawada ?

By Air : Vijayawada has its own airport located at a place called Gannavaram, just 20km from the city. There are frequent domestic flights operated to Hyderabad and Vishakapattinam.

By Train : Viajayawada Railway Station is the second busiest railway junction in the country serving 1.40 lakhs passengers every day. As it is situated Chennai Howrah and Chennai New Delhi rail corridor,almost 250 trains cross Vijayawada connecting most of the cities in the country.

By Road : Pandit Nehru Bus Station in Vijayawada is probably the largest bus terminal in Andhrapradesh. Buses are operated connecting all the places in the state and the neighbouring states like Telengana and TamilNadu as well. Amenities like vending machines, kiosks for passengers, miniplex are the highlights of Vijayawada bus terminal.