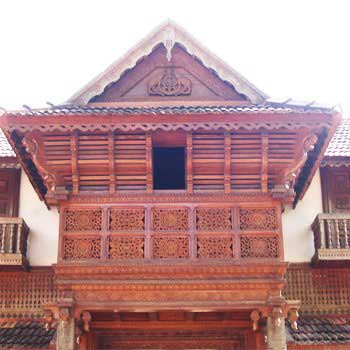 The Royal Mansion – Padmanabapuram palace is being included in the tentative list of the “UNESCO World Heritage Sites” in South India.

An exemplar of Kerala architecture, magnificent wooden palace of 16th century, Padmanabhapuram Palace is located in Padmanabhapuram Fort, close to the town of Thuckalay in Kanyakumari, on the road from Kulasekaram to Thuckalay. It is about 20 km from Nagercoil and about 65 kilometers from Trivandrum. This palace is a good example for a traditional timber construction.

The palace complex is inside an old granite fortress around four kilometers long and it is located at the foot of the Veli Hills, which form a part of the Western Ghats. The palace was constructed around 1601 CE by Iravi Varma Kulasekhara Perumal who ruled Travancore between 1592 CE and 1609 CE.

Visitors to the palace are often overwhelmed by the royal splendour of erstwhile Travancore. Though the palace is situated in Kanyakumari district of Tamil Nadu State, it comes under the Government of Kerala's administration.

Visiting hours: 9:00 am to 5:00 pm on all days except Mondays, Wednesday’s forenoon session and national holidays