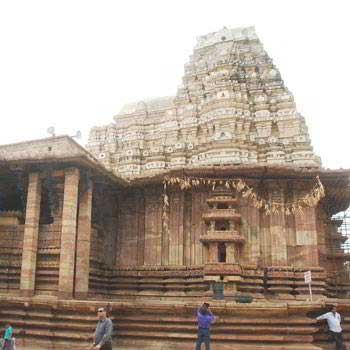 The glory of the Kakatiya Kings, nominated to UNESCO as one of the contestants for the title "World Heritage Site" , standing as a testimony for the distinct architectural pattern and technology of the Kakatiyan kingdom Is the Ramappa temple situated In the newly evolved state of Telengana in India. This is an ancient temple dedicated to Lord Shiva whose existence dates back 1213 AD, which is a never to be missed pilgrimage spot to be included in the South India Pilgrimage Tour packages. The lord housed in this temple is named as Ramalingeshwara Swamy and the temple is located exactly at the 67th km from Warangal city which is otherwise called as the Ekasilanagaram.

Ramappa temple is probably the only temple called after the head sculptor whose perseverance and hardwork for a period of 40 years made this architectural wonder. This temple also bears the pride of being called as brightest star in the galaxy of medieval temples of the Deccan”. This temple is actually place which is a repository of numerous carvings and sculptures adorning the walls and ceilings and the courtyards outside the sanctum. The edifice houses the creative genious and the unique style of Kakatiyan kingdom. The temple is situated in a valley and the roof of the temple is built with a special kind of bricks which will float in water. Thus, in every aspect, Ramappa temple is distinctly unique attracting lot of pilgrims throughout the year.

Ramappa temple was built during the Kakatiya Dynasty in 1213 AD. Its rich heritage and cultural marvel will make you spellbound. The entire temple is resting on a six feet star shaped platform which is the rarest of styles followed in the medieval period. One can witness the architectural excellence while visiting the courtyard outside the sanctum where the beautifully carved pillars reflect the effects of light and space. There are three courtyards before you proceed to the sanctum.The sculptures seem to be frozen records of the dancers and their movements. The sculptures of the celestial dancers called Devanartakis along your way to the Sanctum is an eternal beauty which has inspired so many researchers contributing in the field of music and dance. The aesthetic sense of the Kakatiya Kings and sculptors is found to be at its peak in the sculptures of devanarthakis. Perini, Prenkana, Sudda Nartana, Dandarasak, Sivapriya, Chindu and Kolata are some of the forms of the dances in practice during the medieval period and the postures of these dance forms are wonderfully portrayed through these celestial dancers in twelve pillars.

The wonderful and creative masterpiece, the Ramappa temple, can be compared with the other world renowned monuments like Hampi, Khajuraho and the famous living Chola Temples.. The universal beauty of the Ramappa temple is truly a gateway of the Kakatiyan tradition, culture, construction knowledge, technological development and artistic ingenuinity. It is beyond doubt that Ramappa temple will be an eternal testimony for the culture and tradition of the Kakatiya dynasty and make Indians proud.

The temple remains open from 6AM to 6PM and Lord Ramalingeshwara swamy awaits his devotees to bestow his blessings.

There are many legends associated with Shivaratri:

How to reach ramappa temple:

By train : The nearest railway station is Hanmakona which is 65kms.

By air : The nearest airport at Hyderabad which is 236kms away.

Nearby places closest to ramappa temple :

Warangal fort - it was built by Kakatiya king Ganapati deva in 13th century. It is one of the masterpiece of Kakatiya dynasty. Due to many attacks, some of the parts of the fort has been destructed.

Thousand pillar temple- it was constructed by king Rudhra deva, successor of king Ganapati deva. This temple has three shrines which were dedicated to lord Shiva, lord Vishnu and lord Surya (the sun god). It is located at hanamkonda town in telangana district.

Pakhal Lake- it is situated in the midst of forest land hills. It is constructed by Kakatiya ruler king Ganapati deva. The wildlife sanctuary is the top tourist spot.

Bhadrakali temple- it lies between hanamkonda town and Warangal town. It is located on hilltop. This temple was built by chalukyan king pulikesi II. Later it was came under the control of Kakatiya kings.

Kakatiya musical garden- it is located in Warangal, nearby bhadrakali temple. A musical fountain with eye catchy colourful lights.

Govindarajalu gutta hill- it is surrounded by lush green forest. Gutta” means hill”. It is located in the top of the hill. The attraction here is lord Rama shrine. The top of the hill is the best place to enjoy the view of Warangal city.