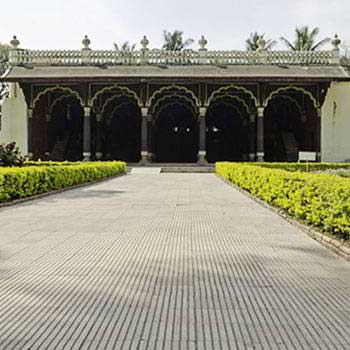 The palace is situated in Albert Victor Road, Chamrajpet, Near Bangalore Medical College. This is the summer palace for the Ruler of Mysore Tipu Sultan. Following the Indo-Islamic Architecture, the construction of the palace was completed by Tipu Sultan in 1791 though it was initiated by another Ruler Hydher Ali. The front area of the palace is maintained by horticulture department and is a lush garden with green lawns. The ground floor of the Palace has been converted to a museum where the artifices and paintings from Tipu's Era are on display. After the Anglo-Mysore war the British used it as a secretariat until moving to Attarah Kacheri . The palace is maintained by the Government of Karnataka and is open for public visits.