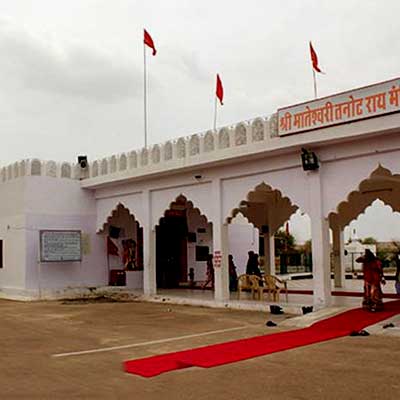 Chart out a trip to Jaisalmer, visit Tanot Mata Temple dedicated to Hinglaj Mata Goddess. Though the temple had been in history since many decades ago, it has become very popular and visited by people with utmost devotion only after the India – Pakistan war in 1971.

The region is also famous for the several windmills , contributing to large quantities of windmill energy. A museum adjacent to the temple exhibits the highlighting moments of the war period and the artefacts used by the Indian Army. If you are planning a tour to Thar desert, Tanot Mata Temple should top your bucket list.

Tanot Mata Temple came to limelight during the India – Pakistan War in 1971. The elderly people in this region still admire the grace of Goddess in safe guarding our Indian Army during the war. There were 1000 bombs shelled on Tanot village and none of them exploded and people strongly believe that this miracle is due to the grace of the Almighty Goddess, protecting the civilians and the Indian Army. Since then, Tanot Mata temple is under the maintenance Border Security Force.

The nine days Navaratri celebrations is a grand occasion in Tanot Mata Temple participated by huge number of devotees. Navaratri is a holy festival in Hinduism, when the three incarnations of Goddess Durga are worshipped. There will be colourful events and religious rituals to witness and to be a part of.

Dress code in Tanot Mata Temple is similar to that of any other Indian temple.

The temple opens at sunrise and closes after sunset with a Puja Arti every evening.

Between October and March, you can plan to visit Jaisalmer and Tanot Mata Temple.

The temple is at a distance of 150 kms from Jaisalmer. Buses ply frequently. Those who are camping at Thar Desert can take a short visit to this iconic temple.